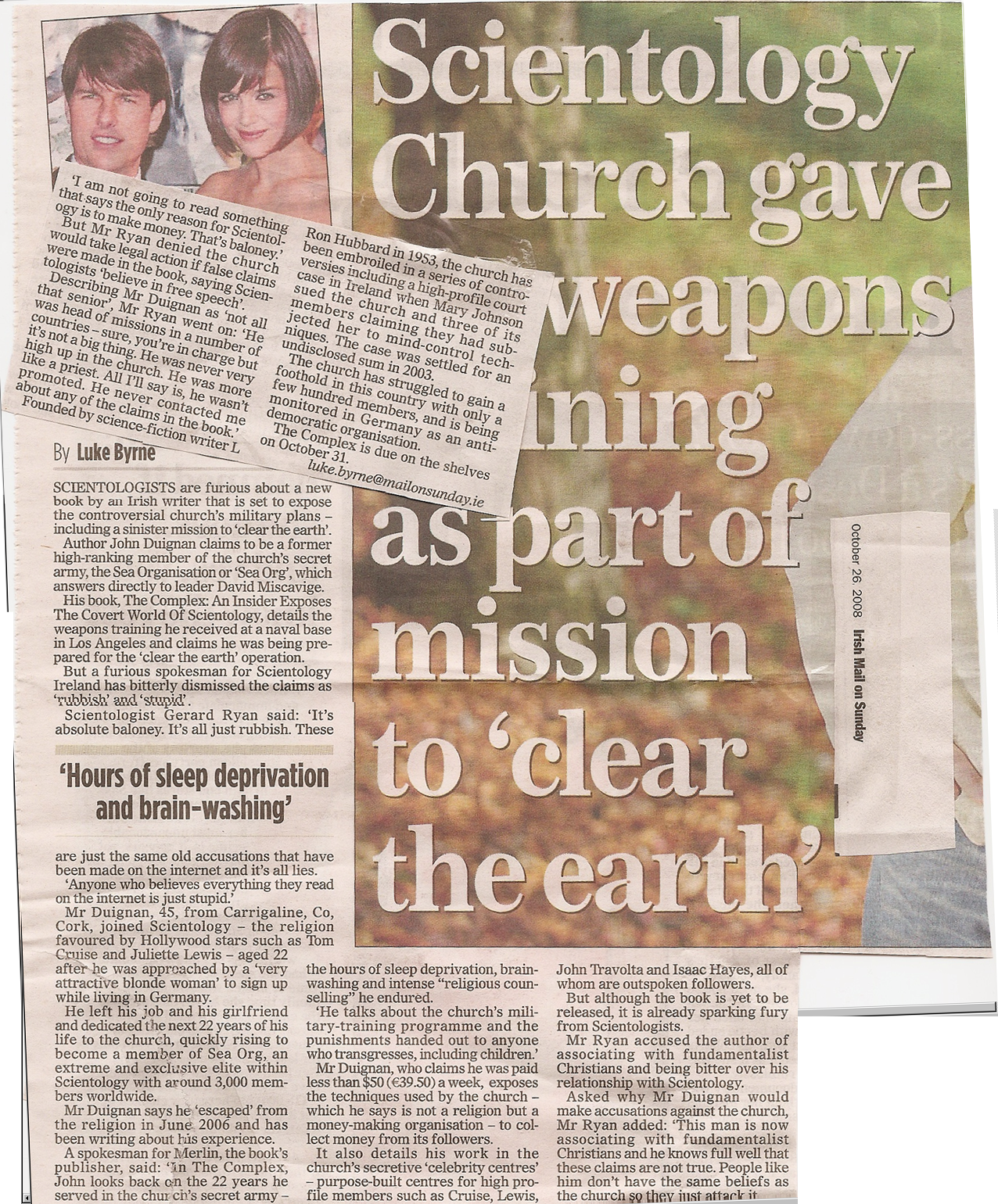 His book, The Complex: An Insider Exposes The Covert World Of Scientology, details the weapons training he received at a naval base in Los Angeles and claims he was being prepared for the 'clear the earth' operation.

But a furious spokesman for Scientology Ireland has bitterly dismissed the claims as 'rubbish' and 'stupid'.

Scientologist Gerard Ryan sad: 'It's absolute baloney. It's all just rubbish. These are just the same old accusations that have been made on the internet and it's all lies.

'Anyone who believes everything they read on the internet is just stupid.'

Mr Duignan, 45, from Carrigaline, Co Cork, joined Scientology - the religion favoured by Hollywood stars such as Tom Cruise and Juliette Lewis - aged 22 after he was approached by a 'very attractive blonde woman' to sign up while living in Germany.

He left his job and his girlfriend and dedicated the next 22 years of his life to the church, quickly rising to became a member of the Sea Org, an extreme and exclusive elite within Scientology with around 3,000 members worldwide.

Mr Duignan says he 'escaped' from the religion in June 2006 and has been writing about his experience.

A spokesperson for Merlin, the book's publisher, said 'In The Complex, John looks back on the 22 years he served in the church's secret army - the hours of sleep deprivation, brain-washing and intense "religious counselling" he endured.

'He talks about the church's military-training programme and the punishments handed out to anyone who transgresses, including children.'

Mr Duignan, who claims he was paid less than $50 (€39.50) a week, exposes the techniques used by the church - which he says is not a religion but a money-making organisation - to collect money from its followers.

It also details his work in the church's secretive 'celebrity centres' - purpose-built centres for high profile members such as Cruise, Lewis, John Travolta and Isaac Hayes, all of whom are outspoken followers.

But although the book is yet to be released, it is already sparking fury from Scientologists.

Mr Ryan accused the author of associating with fundamentalist Christians and being bitter over his relationship with Scientology.

Asked why Mr Duignan would make accusations against the church, Mr Ryan added: 'this man is now associating with fundamentalist Christians and he knows full well that these claims are not true. People like him don't gave the same beliefs as the church so they just attack it.'

'I am not going to read something that says the only reasons for Scientology is to make money. That's baloney.'

But Mr Ryan denied the Church would take legal action if false claims were made in the book, saying Scientologists 'believe in free speech'.

Describing Mr Duignan as 'not all that senior', Mr Ryan went on: 'he was head of missions in a number of countries - sure, you're in charge but it's no big thing. He was never very high up in the church. He was more like a priest. All I'll say is, he wasn't promoted. He never contacted me about any of the claims in the book.'

Founded by science-fiction writer L Ron Hubbard in 1953, the church has been embroiled in a series of controversies including a high-profile court case in Ireland when Mary Johnson sued the church and three of its members claiming they had subjected her to mind-control techniques. The case was settled for an undisclosed sum in 2003.

The church has struggled to gain a foothold in this country with only a few hundred members, and is being monitored in Germany as an anti-democratic organisation.

The Complex is due on the shelves on October 31.