First article, Part One: Intoxicated by Scientologyby Marc AllardLe Soleil(Quebec City) Since he's been out of Narconon, David Edgar Love hardly gets any sleep. He has flashbacks about the traumatic … 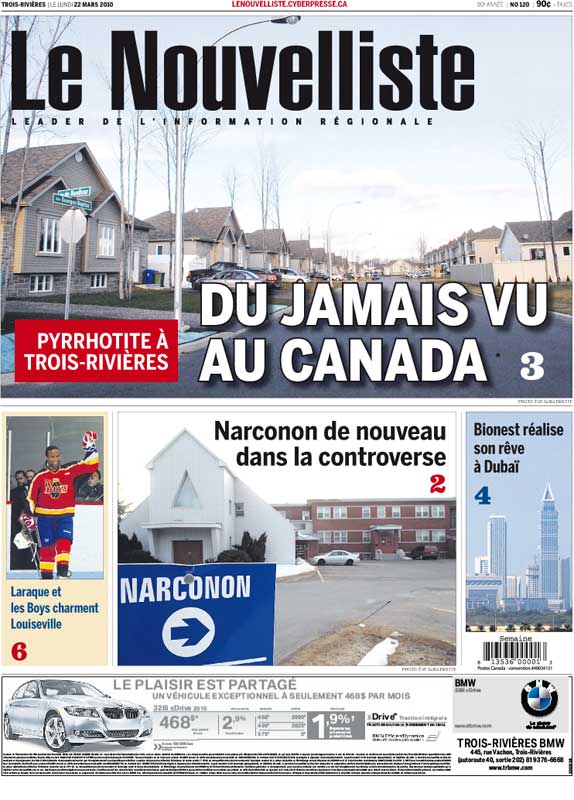 (Quebec City) Since he's been out of Narconon, David Edgar Love hardly gets any sleep. He has flashbacks about the traumatic experiences he says he experienced in the Scientology detox centre in Trois-Rivières, and sometimes he becomes so anxious that he loses his breath.

In November, a doctor at the Cité de la Santé hospital in Laval diagnosed him with Post-Traumatic Stress Disorder. Mr. Love now consults a psychiatrist in a Montreal hospital who was recommended by Mike Kropveld, the director of Info-Cult, and he tries not to appear too drowsy at his new job.

Sitting in a small restaurant in a glum corner of Montreal's Lachine district, where he found a small apartment, Mr. Love, 57, recounts his experience with Narconon, where he was a client from December 2008 to May 2009 and an employee until the end of October.

Revealed for the first time today in Le Soleil, his testimony about the Quebec detoxification centre connected with the Church of Scientology adds to a series of disclosures that have shaken this religious organization in various places throughout the world in recent months.

During the 11 months he spent at Narconon, Mr. Love says he was the victim of harassment, threats and many other violations of his rights. He also says he did not receive a large portion of his salary.

In a letter dated December 21, 2009, the law firm representing Narconon, Heenan Blaikie, offered David Love $2,550.29 on condition that he not share his story with the media. Mr. Love declined the offer.

"They will not silence me," he says. "I have rights and I intend to have my rights respected."

By telephone, Le Soleil reached the director of Narconon Trois-Rivières, Marc Bernard, who declined to give his version of the facts. "I have nothing to say, I have no comment," he said. "No comment."

A resident of British Columbia, David Love arrived at Narconon shortly before Christmas in 2008. He was addicted to methadone and cocaine and had decided to follow the rehab program at the detox centre in Trois-Rivières, where he knew an employee.

During the first weeks of his treatment, Mr Love says he was surprised by the omertà that reigned at Narconon about Scientology. He remembers hearing an employee interrupt a discussion among a group of clients he was in, by issuing an order: "You are not allowed to speak about Scientology when you are at Narconon»

The employee later explained to him that Narconon wanted to avoid the subject so as not to scare clients, their parents, or the "sponsors", who pay more than $20,000 for the treatment, a majority of whose clients are English speakers from the United states and English Canada.

On its Quebec website, Narconon presents itself as a "non-profit program of rehabilitation and detoxification" and boasts of having 50 centres in 21 countries. There is no mention anywhere that Narconon is part of the Church of Scientology.

"Aside from the withdrawal phase, all the courses you take at Narconon are almost identical to those you take at the Church," he says, "Except that when you take them at the church, they only cost you about a quarter or a third of the price."

While he was a client at Narconon, David Love says he was forced to memorize passages from books by L. Ron Hubbard, the science fiction author who founded the Church of Scientology and wrote the 8 books on which the Narconon program is based.

"Any book that might interfere with the mind-altering and brainwashing process is prohibited and confiscated," says David Love.

In addition to reading books by Hubbard, David Love also had to practice regularly the "training routines" prescribed by Scientology's grand master.

He remembers one routine that consisted of sitting for long hours while staring at another client without saying a word and without moving. There was another similar routine in which he was told not to react while his partner bombarded him with insults.

The 57-year-old man also remembers the training routine involving an ashtray. "I had to yell at an ashtray, 'Stand up!' then 'Sit down!' until it obeyed by itself," he said. "But since I was unable to find the right tone, I had to lift the ashtray by myself over and over." "After all these training routines," says Love, "I'm lucky not to be insane."

To help addicts overcome their dependence, Narconon also requires that they strictly follow an intense vitamin and sauna treatment which Scientologists call the "Purification Rundown" and which is also provided by the Church of Scientology of Quebec City at a cost of $2,000.

For two weeks, David Love said he had to spend almost four hours a day in a sauna and swallow large amounts of vitamins and minerals each day. He recalls having had, among other things, to take a lot of niacin, a vitamin (B3) used to reduce a person's cholesterol level.

In a July 17, 2004 interview with the Journal de Trois-Rivières posted on the detoxification centre's website, the director of Narconon Trois-Rivières, Marc Bernard, described the virtues of niacin for expelling drugs from fat cells.

"The toxins remain trapped in fatty tissues for several years," Mr. Bernard explained. "When they are released, this is what addicts call flashbacks."

Asked about this practice, Dr. Lise Archibald, of the Ubald-Villeneuve Rehabilitation Centre in Quebec City, told Le Soleil that she has never read anything about the benefits of niacin for drug addicts.

A toxicology specialist at Quebec's National Institute of Public Health (INSPQ), pharmacist Lyse Lefebvre, also has never heard of niacin as an aid to combat drug addiction. However, she warns that consuming too much vitamin B3 may cause digestive problems, aggravate asthma, lead to a certain form of arthritis attack, and cause redness and itching.

Health Canada recommends a maximum of 500 mg of niacin per day. Clients of Narconon and Scientologists who follow the "Purification Rundown" ingest up to 5,000 mg per day," says David Love.

"The vitamin and sauna treatment was far from pleasant for the clients of Narconon," recalls Mr. Love. "It was horrible. People were sick. They vomited and had diarrhea."

During his rehabilitation, Mr. Love wanted to leave the Trois-Rivières detox centre to return to his family in British Columbia. But he says that Narconon refused to give him his wallet and his identity papers, even though he requested them more than once.

Except in special cases, Quebec law prohibits forcing drug addicts to continue treatment, which is to be followed on a voluntary basis.

Mr. Love recalls that, instead of giving him his papers, he was sent to the "ethics officer", who argued that he should stay longer.

"Many students want to leave and try," he says. "Some even manage to leave and set out on foot along along the road, but the ethics officer is called and a car is sent to recover them and bring them back to the Narconon buildings."

David Love said he never witnessed a client being forced to get into a car. Instead, he points out, Narconon calls a student's parents or sponsor and convinces them not to pay the bus or air fare for the student.

Every day, adds Mr. Love, Narconon's staff closely monitors the comings and goings of their customers. "It's like a military base," he says. "There is security, they have radios. They check on you every 20 minutes to know where you are." 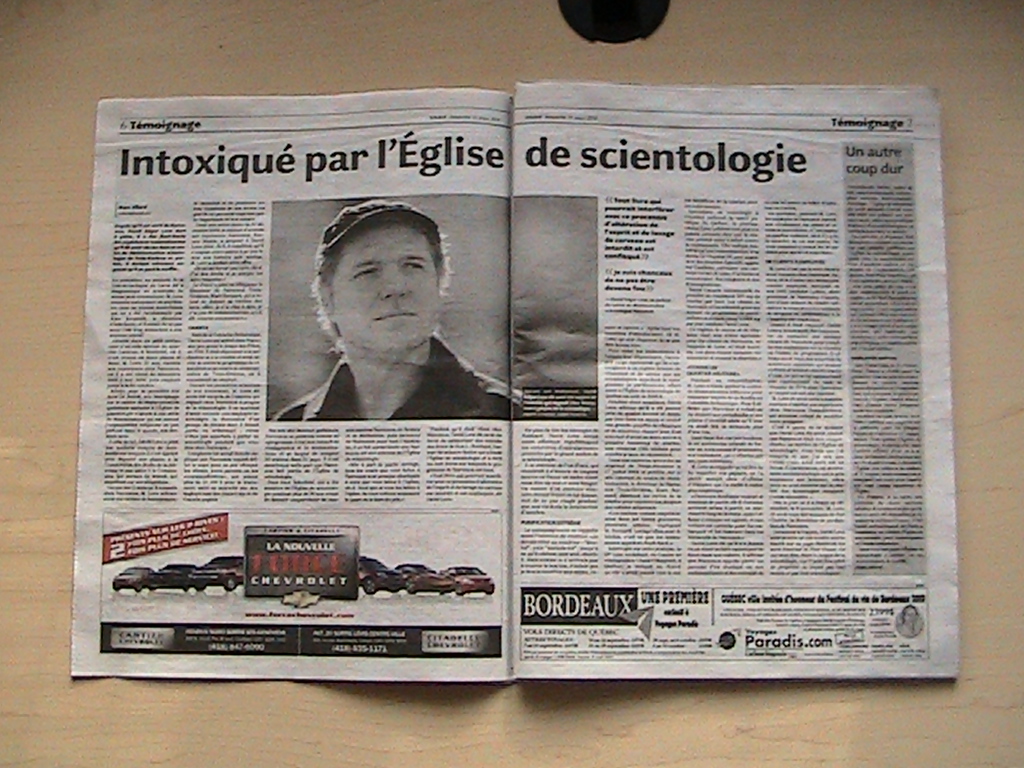 Mr. Love is not the only client to have worked at Narconon. About 40% of clients subsequently become employees, according to a statement made in May 2002 by Devinder Luthra, then president of Narconon Canada, at a session of the Special Committee on Non-Medical Use of Drugs in the House of Commons.

While he was an employee, David Love was responsible for contacting former clients of Narconon to compile statistics on the success or failure of the program. He says he received emails from many "exes" who had relapsed and still need help. What he was hearing did not appear to match the 70% success rate which Narconon boasts about on its website.

Mr. Love says he tried repeatedly to warn his superiors at Narconon Trois-Rivières, but they refused to change their practices. 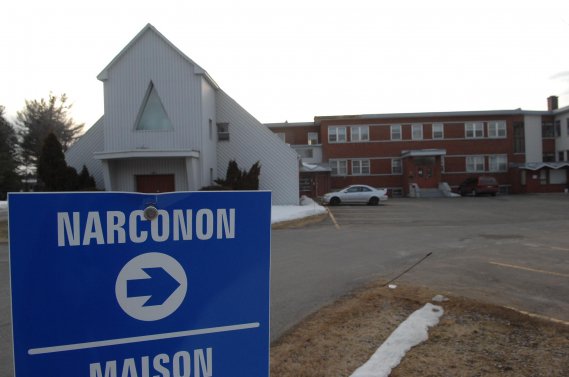 It was at this point that David Love says he realized Narconon was a "hoax" at the service of the Church of Scientology. "Once I understood and believed it was true," he wrote on a message board operated by Anonymous, an anti-Scientology movement that originated on the Internet, "My eyes were opened to the reality of the lies that I had swallowed."

From the day he resigned, November 3, Mr. Love says he received threats from Sue Chubbs, Narconon's director of production.

With documents to prove it, David Love shows that, among other things, she posted on his FaceBook page the words "Enemy" and "Fair Game". This means, in Scientology jargon, he "may be deprived of property or injured by any means and by any Scientologist."