Cork students have been urged to be cautious if approached by members of religious organisations while traveling abroad. Members of the anti-Scientology group Anonireland.org gathered outside City Hall earlier this week to protest the inclusion of a 'Dianetics and Scientology' stand at the Mind Body Spirit Festival held at the venue. While one protester refused to remove his mask for fear of being "destroyed" by members of the Church of Scientology, ex-Scientologist and founder of Anon-Ireland Peter Griffiths spoke out to warn Cork people that Scientology was, in his opinion, "a fraud and a scam".

Passer-by Rosemary O'Farrell, stopped to show her support for the protesters outside City Hall. The Corkwoman shared her experiences of the Church, made famous by celebrities such as Tom Cruise and John Travolta. She told the Cork News, "Many years ago some friends of mine had a family member who was brainwashed by a group of Scientologists in Australia. The man, originally from Limerick, disappeared for a time and when his family finally found him, they had to take him to be 'deprogrammed'. He was later kidnapped by this group who were intent on controlling him. I think it's very important that parents warn their children about these kinds of groups before they travel abroad or they could find themselves in the same situation." Ms. O'Farrell continued, "In my experience, they prey on people who might be weak or out of their element, on the street or in soup kitchens and homeless shelters."

Anon Ireland takes particular exception to a policy entitled Fair Game, written by Scientology’s founder, science-fiction author L. Ron Hubbard. The policy states that critics of the organisation "May be deprived of property or injured by any means by any Scientologist without any discipline of the Scientologist. May be tricked, sued or lied to or destroyed.”

The group also campaigns against the practice of Disconnection, the severance of all ties between a Scientologist and a friend, colleague, or family member deemed to be antagonistic towards Scientology, claiming it has split up families. 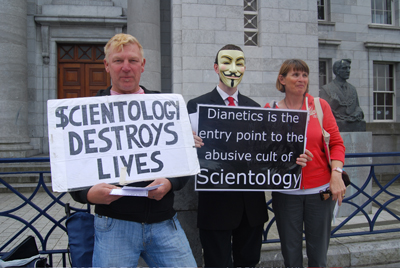