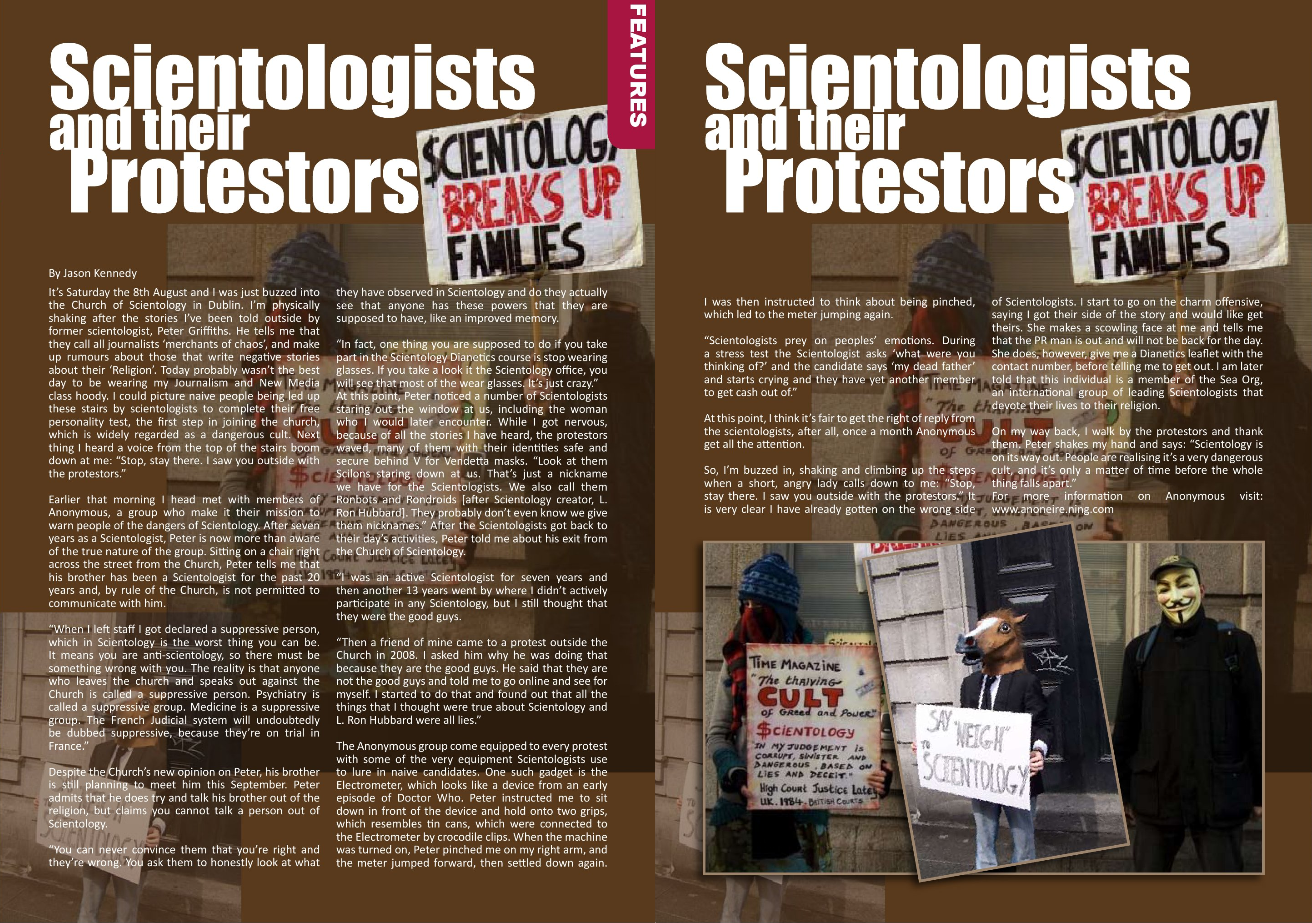 It's Saturday the 8th August and I was just buzzed into the Church of Scientology in Dublin. I'm physically shaking after the stories I've been told outside by former scientologist, Peter Griffiths. He tells me that they call all journalists `merchants of chaos', and make up rumours about those that write negative stories about their `Religion'. Today probably wasn't the best day to be wearing my Journalism and New Media class hoody. I could picture naive people being led up these stairs by scientologists to complete their free personality test, the first step in joining the church, which is widely regarded as a dangerous cult. Next thing I heard a voice from the top of the stairs boom down at me: "Stop, stay there. I saw you outside with the protestors."

Earlier that morning I head met with members of Anonymous, a group who make it their mission to warn people of the dangers of Scientology. After seven years as a Scientologist, Peter is now more than aware of the true nature of the group. Sitting on a chair right across the street from the Church, Peter tells me that his brother has been a Scientologist for the past 20 years and, by rule of the Church, is not permitted to communicate with him.

Despite the Church's new opinion on Peter, his brother is still planning to meet him this September. Peter admits that he does try and talk his brother out of the religion, but claims you cannot talk a person out of Scientology.

"You can never convince them that you're right and they're wrong. You ask them to honestly look at what they have observed in Scientology and do they actually see that anyone has these powers that they are supposed to have, like an improved memory.

"In fact, one thing you are supposed to do if you take part in the Scientology Dianetics course is stop wearing glasses. If you take a look it the Scientology office, you will see that most of the wear glasses. It's just crazy." At this point, Peter noticed a number of Scientologists staring out the window at us, including the woman who I would later encounter. While I got nervous, because of all the stories I have heard, the protestors waved, many of them with their identities safe and secure behind V for Vendetta masks. "Look at them Scilons staring down at us. That's just a nickname we have for the Scientologists. We also call them Ronbots and Rondroids [after Scientology creator, L. Ron Hubbard]. They probably don't even know we give them nicknames." After the Scientologists got back to their day's activities, Peter told me about his exit from the Church of Scientology.

"I was an active Scientologist for seven years and then another 13 years went by where I didn't actively participate in any Scientology, but I still thought that they were the good guys.

"Then a friend of mine came to a protest outside the Church in 2008. I asked him why he was doing that because they are the good guys. He said that they are not the good guys and told me to go online and see for myself. I started to do that and found out that all the things that I thought were true about Scientology and L. Ron Hubbard were all lies."

The Anonymous group come equipped to every protest with some of the very equipment Scientologists use to lure in naive candidates. One such gadget is the Electrometer, which looks like a device from an early episode of Doctor Who. Peter instructed me to sit down in front of the device and hold onto two grips, which resembles tin cans, which were connected to the Electrometer by crocodile clips. When the machine was turned on, Peter pinched me on my right arm, and the meter jumped forward, then settled down again.

I was then instructed to think about being pinched, which led to the meter jumping again.

"Scientologists prey on peoples' emotions. During a stress test the Scientologist asks `what were you thinking of?' and the candidate says `my dead father' and starts crying and they have yet another member to get cash out of."

At this point, I think it's fair to get the right of reply from the scientologists, after all, once a month Anonymous get all the attention.

So, I'm buzzed in, shaking and climbing up the steps when a short, angry lady calls down to me: "Stop, stay there. I saw you outside with the protestors." It is very clear I have already gotten on the wrong side of Scientologists. I start to go on the charm offensive, saying I got their side of the story and would like get theirs. She makes a scowling face at me and tells me that the PR man is out and will not be back for the day. She does, however, give me a Dianetics leaflet with the contact number, before telling me to get out. I am later told that this individual is a member of the Sea Org, an international group of leading Scientologists that devote their lives to their religion.

On my way back, I walk by the protestors and thank them. Peter shakes my hand and says: "Scientology is on its way out. People are realising it's a very dangerous cult, and it's only a matter of time before the whole thing falls apart." For more information on Anonymous visit: www.anoneire.ning.com